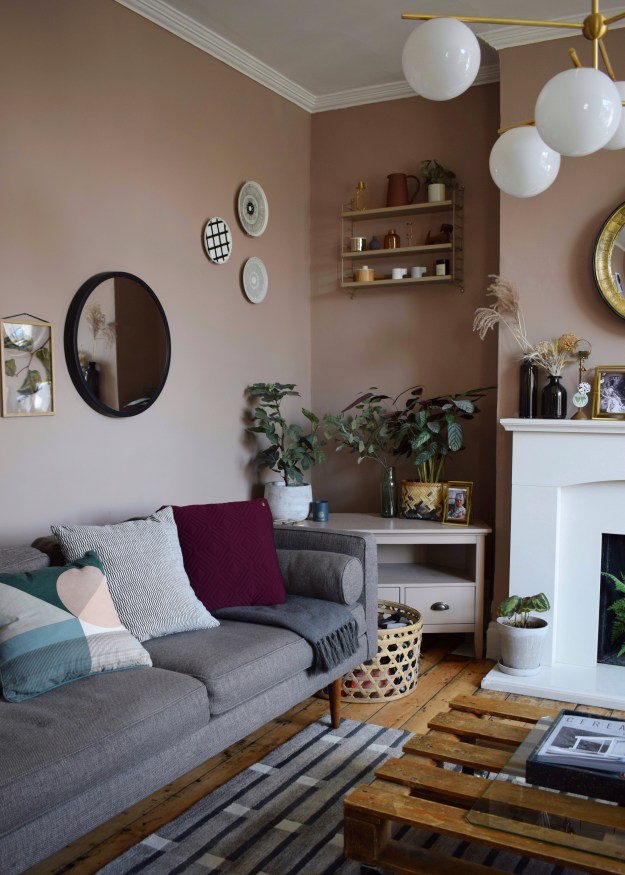 /
All good things come to those who wait, or so the saying goes. And after probably the longest makeover in the Design Soda house ever, our new living room is finally finished and I’m able to share it today. The wait may have been long but it was definitely worth it. I’m so happy with it, it ticks all the boxes on brief and then some.And as I’ve lived with it in the varying stages for quite a while, I can wholeheartedly say that it hasn’t been a short lived love affair in the way that anything fresh and new can sometimes be. If you saw my Design Plans post back in January then you’ll know all about the inspiration behind it and the fact that our refresh was kickstarted by the dire need for a new sofa. I had been a little daunted about changing up something I’d loved so much. I’d used various central aspects of the design for nearly 8 years in different living rooms. I can’t stress how much I loved the previous colour, it was an absolute favourite, and if I’m honest I’m thinking of bringing it back in another room of the home. But with a new sofa, in a different style the whole space needed a re-think. And as we had initially designed our room as a couple (before kids or cats arrived) it was long overdue some thought on function.
/ 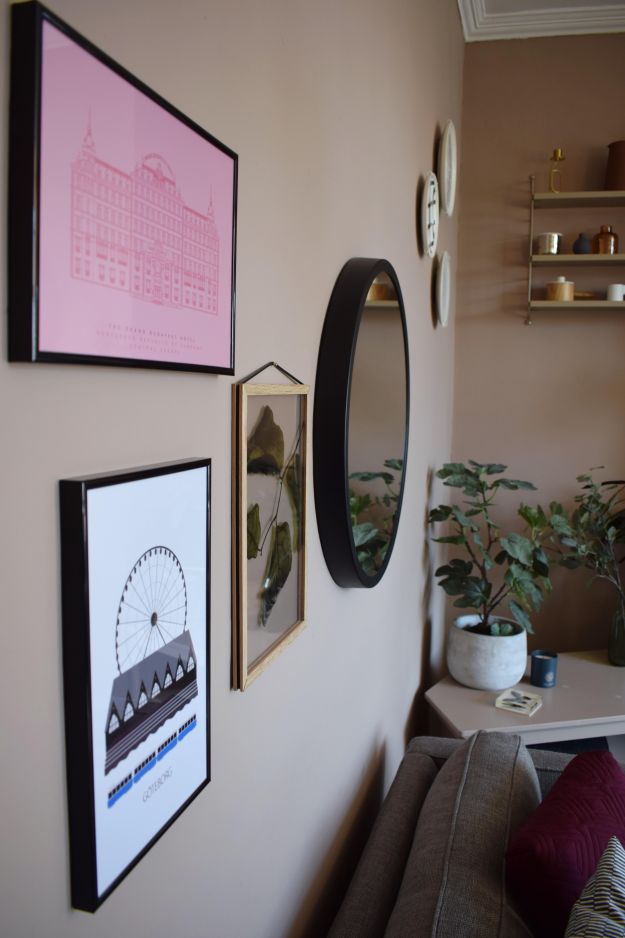 /
Our living room used to be a space that was uninhabited during week days, it was somewhere to relax but also somewhere I wanted to feel uplifted and I was quite happy to fill it with pieces I loved but that needed looking after with lots of dusting and careful owners who didn’t break things (OK, I’m mainly referencing the toddler here!). The old space had a bit of a bric-a-brac feel, being dotted with various flea market finds, and our re-design was, in a lot of ways, about paring back and making the room feel more functional, less like a space you needed to be careful in. I spend so much of my time clearing away piles of toys that mount by the minute in here that the bric-a-brac needed to be more streamlined and I knew a rethink on toy storage was going to be in order too.  But I also didn’t want the space to feel sterile as I so often see when you add kids into a space. Whilst any space I make is never going to be minimalist, I wanted something a little sleeker, lower maintenance in muted tones that was easier to keep smart. I was really lucky to work with some of my favourite brands on this makeover. Chiefly West Elm who supplied a lot of the central items you see, but also Eleanor Pritchard for Case Furniture, String shelving, Amara, Cox & Cox and Farrow & Ball.
/Scandinavian Living Room makeover, muted pink, neutrals, mid-century simple design, West Elm, Far 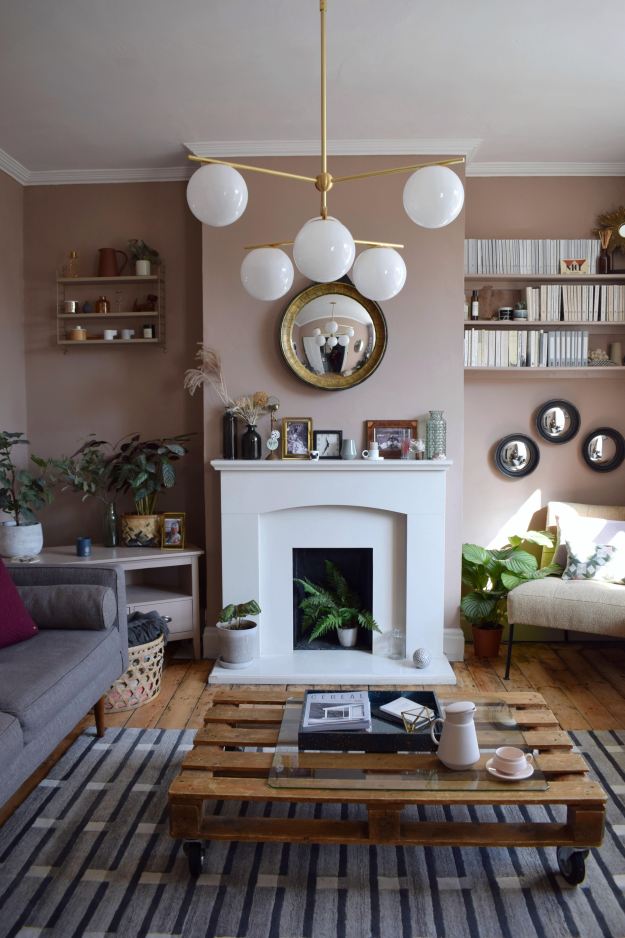 row Ball Dead Salmon, Craft luxe, interior design ideas and inspiration
/
Lets start by talking about that colour change, as the base of the room it seems as good as any place to start. I had been eyeing this shade for quite a while, since I saw it on the walls of The Talisman showrooms back in Spring last year. The thing with Farrow & Ball which makes their paint so unique is that you never quite know how a shade will look in different environments. They are almost living breathing colours which change and mould to surroundings, Mouses Back will look completely different in a south facing high ceiling-ed room to a north facing cottage one, for example. Happily for me, Dead Salmon works perfectly in our South-facing living room, it acts to pick up the light and dapple the room with the softest of earthy pinks during the day, whilst as the evening draws in it turns muddier, cosier with a muted warmth. I’m really delighted with the colour, having loved our previous Teresa’s Green so much this new shade had a lot to live up to but happily I am completely in love with this new colour and it was so time for a change.
/ /
The first item of furniture chosen for the room, which prompted the starting point of the design, was the Monroe three seater Mid-Century sofa from West Elm. This is such a gorgeous piece with the most beautiful mid-century lines, the bolster cushions providing just the right note of glamour and boy is it comfy and massive! We sit, we lie, one of us lounges (that will be the three year old again), we all love it, such a versatile piece and I’m so pleased to be able to accommodate three full sized human beings on here. 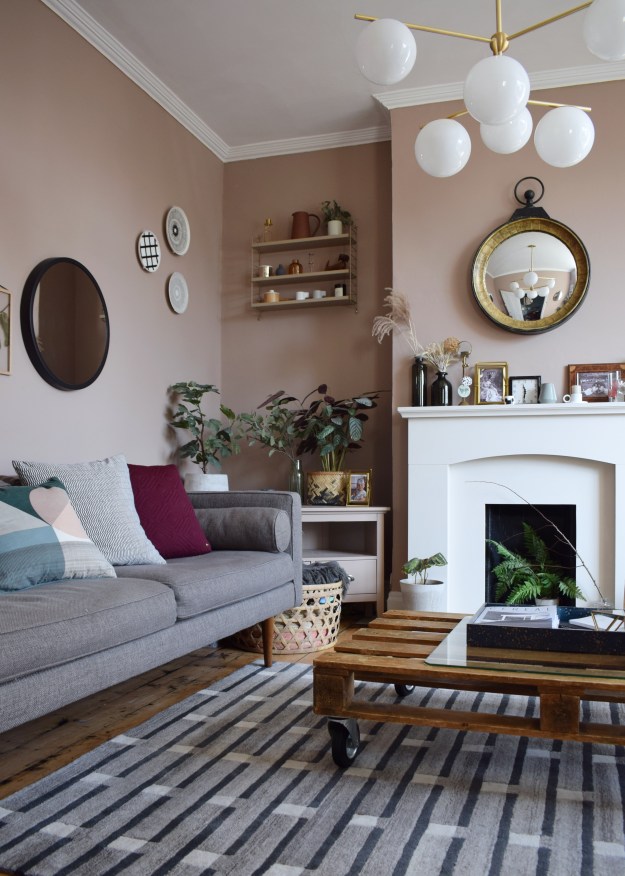 To compliment the sofa I got a fabulously striking rug designed by one of my favourite textile designers, Eleanor Pritchard, for Case Furniture. This hand tufted Purlin rug takes inspiration from the graphic lines of London architecture, named after the roofing structure it was inspired by, I love the warm metropolitan greys of this piece and it provides a brilliant British Mid-Century accent to the room.
/ /
For the accessories in the room I have kept things fairly neutral with monochrome and natural coloured cushions on one sofa, and on the other I have moved some old MADE cushions into the room alongside the most brilliantly hued Burgandy quilted cushion from Ferm Living (which was, and is currently, half price), it really pops against the grey of both the sofa and the super soft blanket that lives there.
/ 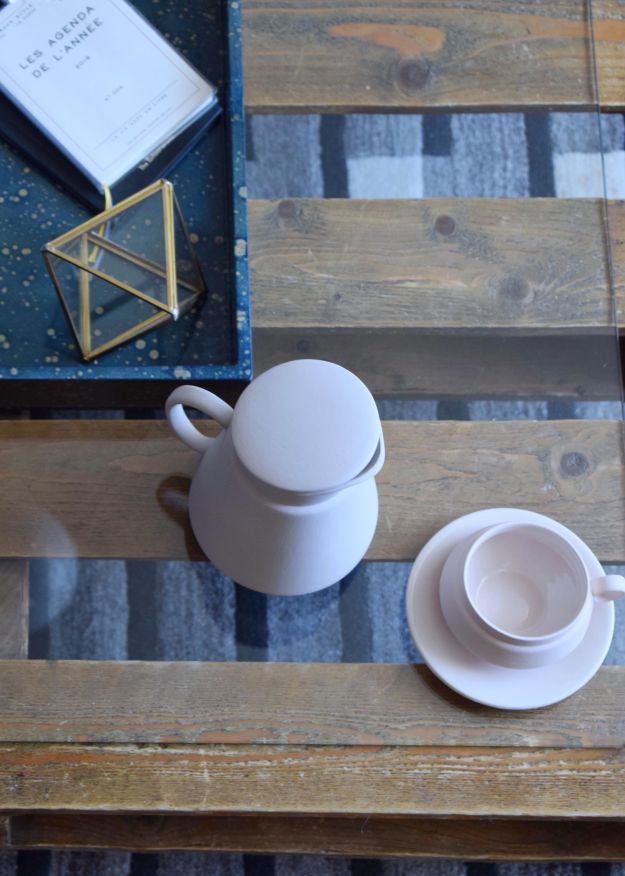 /
On the coffee table I have been delighted with the splattter design Lacquer tray, which nods to my love of abstract pattern and terrazzo and the metallic of colours used really lifts the look of the table. Now, don’t suspend disbelief for me here, but I also treated myself to this artisan tea set by Hend Krichen which I saw at Houzz of 2018. It won’t live on the coffee table permanently, I couldn’t trust our 3 year old (!), but on those perfect afternoons when I get time to myself and am able to work from the living room, these two luxuries bring me a lot of joy and again take the upcycled table beneath from something rustic to something far more sophisticated.
/ 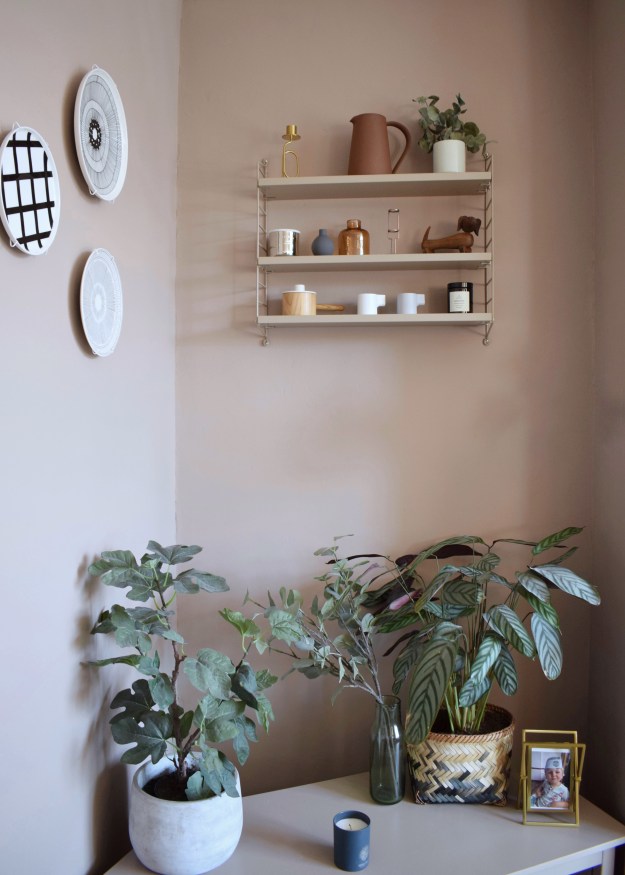 /
As a thank you for my styling job at Skandium for London Design Festival last year I was delighted to be given a set of these Scandinavian classics, the String Pocket shelves in the Sand colourway. They look  just perfect here with the simple styling of other understated, mainly Scandinavian, objects. On the wall, plates in place of art is an old trick I never tire of, I like how they add interest and texture and I have added in a selection of Marimekko from Amara in place of the vintage plates that were here before.
/ 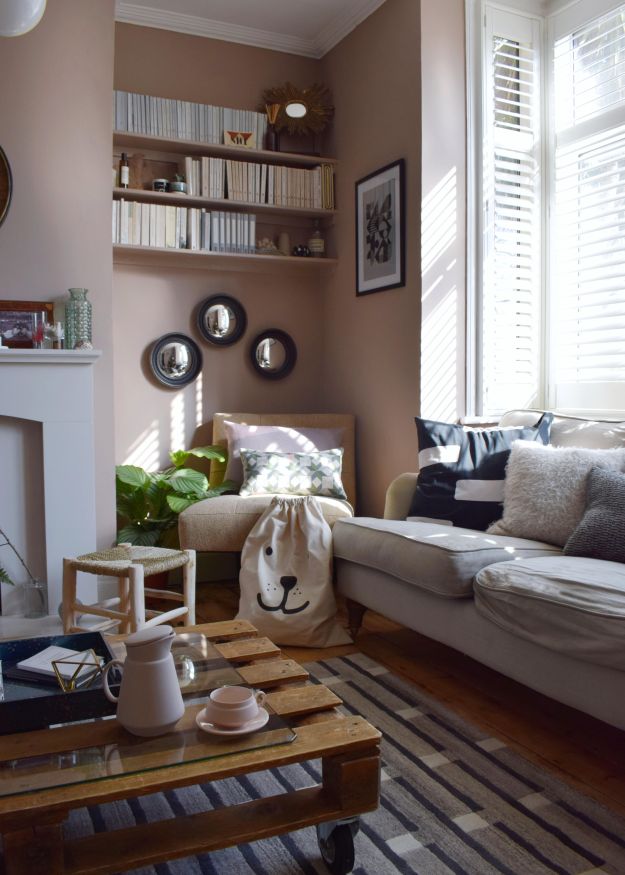 /
I have changed the books up in here a little too. We all know that books furnish a room (right?) but they do have to be the right books aesthetically too (or is that just me?). We previously had gorgeous colourful editions on these shelves but those books were too attention grabbing in this space so they’ve been swapped out for mainly white and silver Penguin Classics. I love this simple Oswald tufted slipper chair underneath from West Elm which not only adds much needed seating space but also adds an elegant line to this corner of the room.
/ 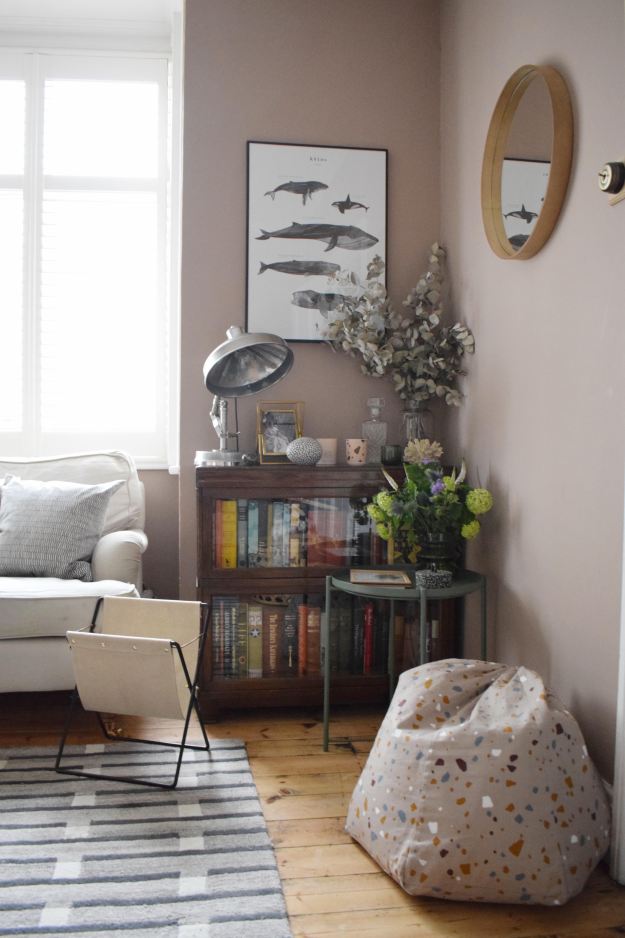 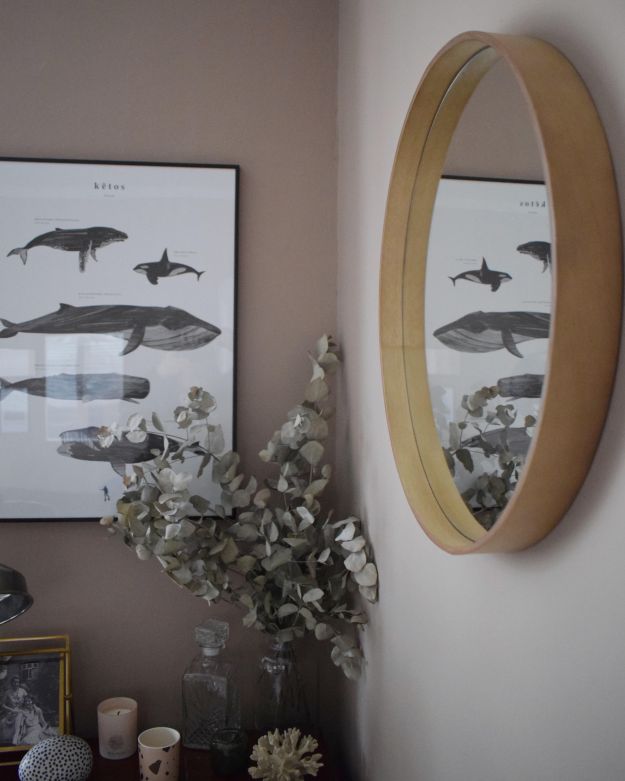 /
The vintage Globe Wernicke bookcase above is one of the few original items that has stayed in here, but the corner has been updated by a replacement of the other vintage items with Scandinavian items. I have brought the Ferm Living terrazzo pouf downstairs from our hallway makeover, and also added a magazine rack from the same company via Amara. To highlight the natural tones of these items, I picked up a very purse-friendly mirror from Sainsbury’s Home and rehomed the Ketos whale poster from Coco Lapine from our study to this corner where I think it sits pretty perfectly.
/ 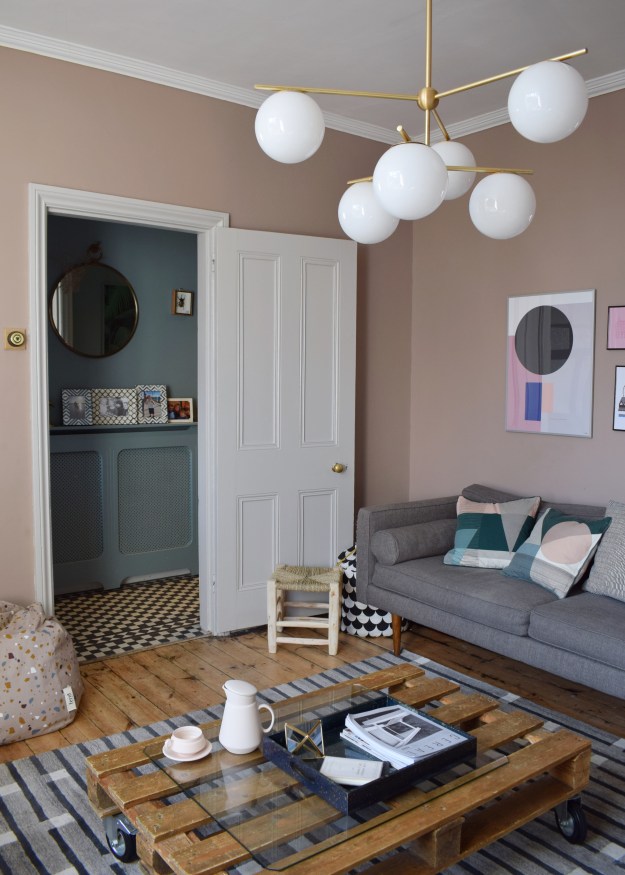 /
As I started to near the end of the makeover and was waiting for the arrival of my Sphere & Stem chandelier from West Elm via America, I finally made a decision on the woodwork. I knew it couldn’t remain white, white is just too harsh for a space that feels so cosy and muted, I wondered about brown or burgundy, but I thought they may look a little harsh, just the wrong side of seventies, and maybe even jarring.  I went for a mid-tone grey which we’ve previously used in an upstairs bedroom called Cornforth White. This grey is just there, it softens the lines of the door and skirting and looks almost oyster like next to the walls. I’m so pleased with this colour combination, pink and grey are one of my favourites, and this earthy pink looks even better with the grey.
/ /
And finally the light – The Light! This incredible piece is such a statement and really is beautiful. As I had kept most of the things in the room on the simple side I knew that I wanted a light which would make a big impact and you don’t get much bigger, more beautiful or more impactful than the Sphere & Stem chandelier from West Elm. A pet peeve of many Interior designers is rooms where the lighting hasn’t been given enough thought, especially central focal light. I had never fully appreciated the impact of great lighting until we had this piece installed! It’s elegance really pulls the whole look together and having such a glamourous statement piece sets the tone of the room from the second you enter, I am so delighted with it.
So that’s it, my new calm space of muted tones, what do you think?! I’m going to be brave and ask, do you like it as much as my previous award winning space?! I hope so, we are all a little in love with with our new space in the Design Soda house.
/ 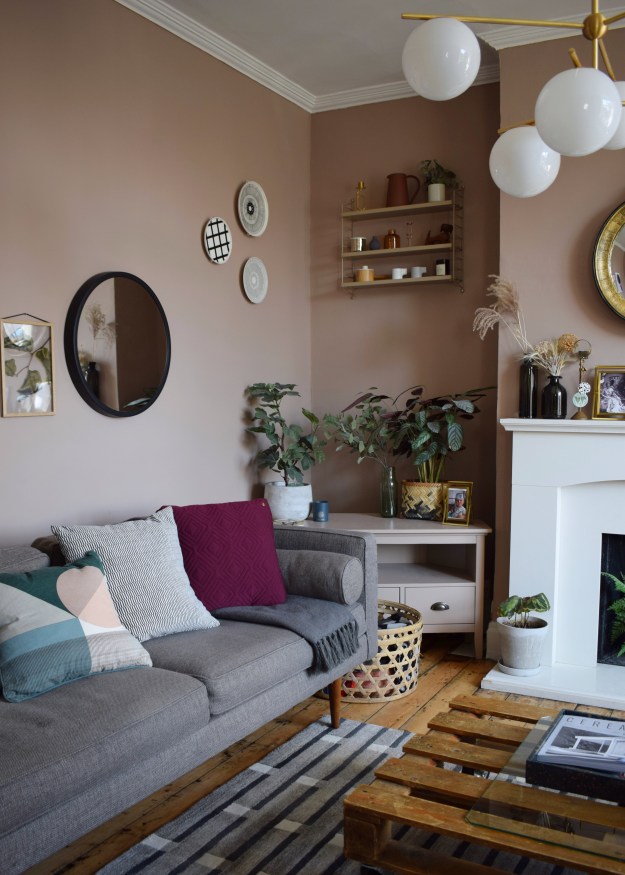 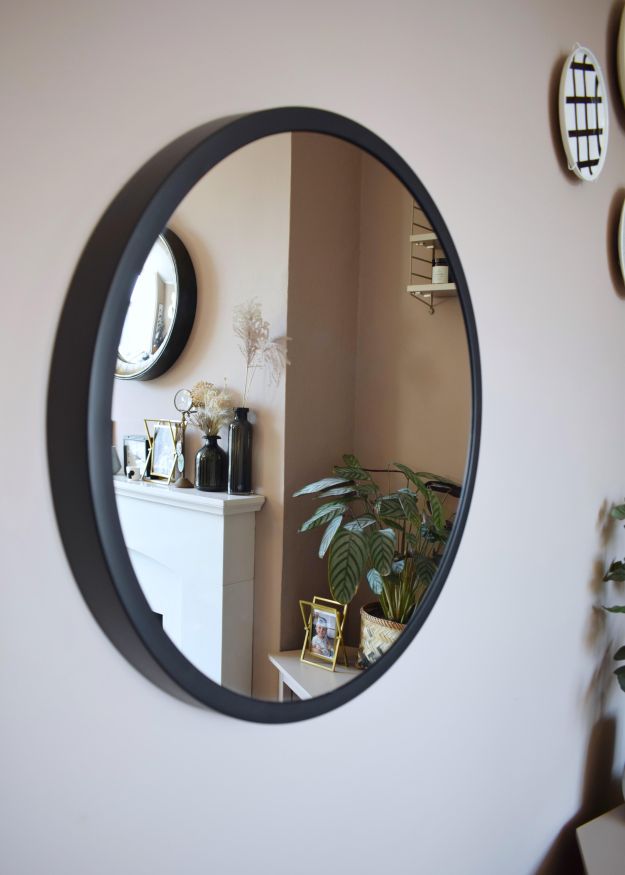 Source List (* indicates where an item has been gifted):

Pocket shelves in the Sand* – String 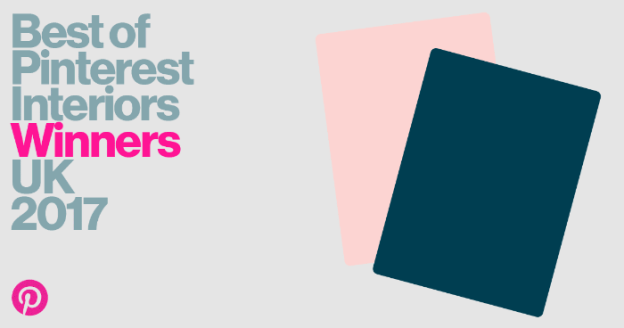